The many records submitted to the Club website this month really highlight the great variety of birds being seen by enthusiastic observers. We have certainly had some wild weather this month and some glorious sunny still days too and all conditions seem to bring about interesting sightings.

There are numerous interesting records from our woodlands and heathlands.

A Brush Bronzewing at Ocean Grove Nature Reserve was a great treat as we do not receive many records of this pigeon species on the Bellarine Peninsula.  Similarly a beautiful Pink Robin seen and photographed in the small woodland at Tait Point overlooking Lake Connewarre was delicately tinged pink. It is often so interesting to explore these small remnants and plantings and roadside corridors for their birdlife as often unexpected birds do pop up.

Flame Robins and Gang-gang Cockatoos are adding autumn colour to many sites around Geelong and by contrast two young European Goldfinches, lacking the typical red face, were seen in Highton.  Little Wattlebirds are rarely seen around Bacchus Marsh and have not established populations so an observation this month from that part of our reporting region was noteworthy. Similarly a high number of 30+ Singing Honeyeaters in Jan Juc was entertaining as they caught insects in the evening warmth.

Classic scarce dry woodland birds this month include two White-bellied Cuckooshrikes silently exploring the eucalypt canopy at Bannockburn, a small flock of Swift Parrots in flowering Eucalypts at the You Yangs and a Specked Warbler at Long Forest – a species still hanging on in low numbers in our region.

Club members have been exploring the saltmarsh around our lakes and coast this month and finding many fascinating birds. A total of 377 Blue-winged Parrots at Lake Connewarre was phenomenal and helped account for the complete lack of parrots in other sites. Hopefully it shows food reserves at that site are plentiful. Similarly an immature Spotted Harrier in saltmarsh at the same locality was a great record for this uncommon eye-catching raptor. Families of Black-shouldered Kites at Balliang and Wallington with rusty-toned juveniles are always a delight and are a reminder that some of our birds breed successfully well into autumn and winter when food sources are available. A point reinforced with the very recent observation, at Wallington, of courtship feeding and copulation of a pair of Brown Falcons.

We received several records of the much sought after Australasian Bittern from Hospital Swamp and reiterates the importance of the interconnecting wetlands of Reedy Lake, Hospital Swamp and Lake Connewarre for these secretive reed-frequenting waterbirds. White–fronted Terns are a winter highlight for birders prepared to brave the cold windy coast and so two birds at Pt Lonsdale was a great record.

Good flocks of 2500 and 400 Banded Stilts at Lake Murdeduke and Moolap Saltworks, respectively, were a welcome thrill after a long hiatus. A good flock of 43 Double-banded Plovers at Pt Impossible was a pleasing winter treat. A sole Latham’s Snipe at Lara in May was a really unexpected sighting with the entire population of these migratory shorebirds moving north in February-March to breed in northern Japan.

And in breaking news a Spangled Drongo hawking for insects mainly along the southern shore of Blue Waters lake at Ocean grove has caused a great deal of excitement! It was identified as a first year bird with dull brown eyes and retained juvenile feathers with pale spots, streaks and fringes. The species is a vagrant to our region with this bird turning up unexpectedly. Though it is fascinating to delve into the resources of eBird (remember to log-in) and set Explore Species map option https://ebird.org/australia/explore  to Spangled Drongo and adjust the date range to January and then May to see that this species does curiously wander south and westwards after breeding along the east coast from mid-north New South Wales. You should end up with something like these maps. Red icons are records from the last 4 weeks. 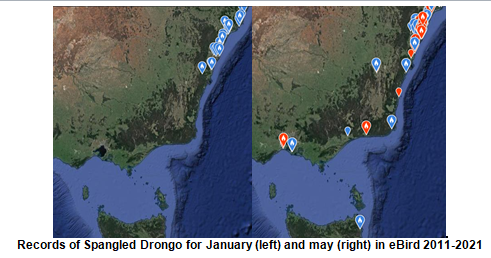 Once more we sincerely thank the numerous observers, who keenly and diligently record their observations and submit them to our web-site and/or directly to eBird as complete lists or incidentals.