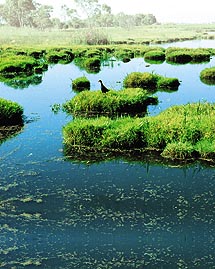 The Belmont Common is bordered by Barwon Heads Road, Breakwater Road and the Barwon River, and it is here, close to roads, shops and industrial sites that one of Geelong's very special places, Jerringot Wildlife Reserve is found. Jerringot is a Koori word meaning 'water all around' or 'place of billabongs'. It was a camping ground and a meeting place for the local Wathaurong tribes, as the Belmont escarpment sheltered the Common area from the cold westerlies.

There was abundant food available, such as :

Before European settlement the area was open grassy red gum woodland. The tangled lignum, Muehlenbeckia florulenta and some of the aquatic plants such as reeds and rushes remain today as remnants of the original vegetation. Jerringot contains 12 species of plants which are considered regionally significant. Common Nardoo, Marsilea drummondii, is considered rare locally. Water Plantain, Alisma plantago aquatica, is not common west of Melbourne. This plant grows in water up to 45cm in depth, and survives when the water level falls. This is a species which requires regular flood cycles for survival. 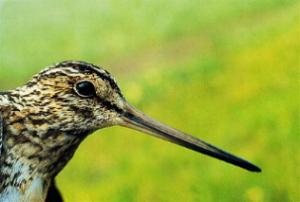 Over 120 species of birds have been recorded at Jerringot. One of the most notable birds on the wetland is Latham's or Japanese Snipe, Gallinago hardwickii. Of international significance, these snipe breed in Japan and then fly 2000 km to south eastern Australia, arriving early spring and staying until late summer. Jerringot is one of the most important and ideal sites for Latham's Snipe. Over 300 birds have been recorded in trapping and banding surveys, and an estimated 1000 individuals use Jerringot each year.

There are 37 species of birds which breed here, a very high number for an urban parkland. Since 1996 the tiny Baillon's Crake, Porzana pusilla, has been recorded breeding in the Golf course Swamp at Jerringot, one of only two recorded breeding sites in Victoria.