The GFNC is a club for anyone interested in wildlife, plants, or conservation in the Geelong region.
The club holds monthly meetings (via a mix of Zoom and face to face) and excursions.
Most meetings have presentations from specialists in aspects of natural history and conservation.

Info on how to join is here

From Buckley's to the Break

A history and natural history of the Barwon River through Geelong.

This book was published in 1987. The GFNC have sold out, but copies may be obtained from second-hand book dealers. You may also borrow this from Libraries (including the GFNC library). Below are two extracts from this book which give you an idea of what it is about. 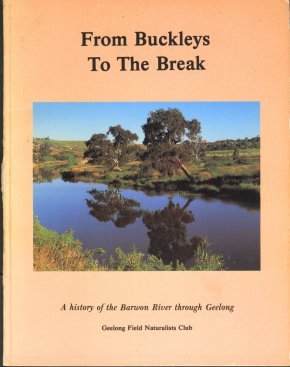 From Buckleys to the Break is about the Barwon River as it flows through Geelong. It tells the history of its use by man, both black and white, and describes its natural history, the rocks of its bed and banks, the birds, animals, fish, insects, plants of today and yesterday. As well, it takes a detailed look at various spots along its urban course.The section covered starts at Baum weir, a short way upstream from Buckleys Falls, and finishes at the Upper Breakwater, the stone barrier built early in the history of Geelong to give the then small community fresh, instead of brackish, water

There is variety in the river scenery in its urban reaches, ranging from the gorge in the upper section where the water tumbles over broken rocks, to the park-like middle stretch set against the backdrop of the rounded Barrabool hills and on to the flood plain which extends downstream from the final city bridge.

The waterway also has biological significance. It acts as a corridor for migrating birds and animals such as Koalas and Possums use its trees as habitat. Some areas adjoining the river are high quality wetlands and must be maintained in their natural state. They are part of the total river ecosystem, whose delicate balance can be easily upset.

The immediate environment can be spoiled by pollution, unsympathetic recreational use causes erosion of the banks, stormwater can bring rubbish into the river from drains that were once tributary creeks. The untimely release of salty water from the Cundare Pool upstream, the filling of the flood plain downstream which normally acts as an overflow or control in times of flood and the removal of streamside vegetation all have significant effects on the river in Geelong.

Today people live on both banks of the river; in the early years of settlement in Geelong there were but a few houses, and the river was a focus for the industry which used its water.

Along both sides today there is open space - parklands, golf courses, walking and cycle tracks; and some of this, such as Queens Park, was reserved very early in Geelong history. The trend by modern city planners is to keep the river environs for people. Tracks have been constructed and much has been done to restore the native vegetation, with plans to continue the work on both sides of the Barwon as it flows through Geelong.

The river environment has been much changed over the past 150 years. was neglected for a long time; rubbish and weeds allowed to deface its banks, settlement to creep too close. Now it is coming into its own again. The controlling bodies understand the river's potential for recreation and its importance as a biological corridor, and are providing facilities to add to people's enjoyment and appreciation of this extremely interesting stream.

More and more people are using the river and the land beside it. We hope this book will add to their appreciation of the Barwon.